You are here: Professional > Clinical Features 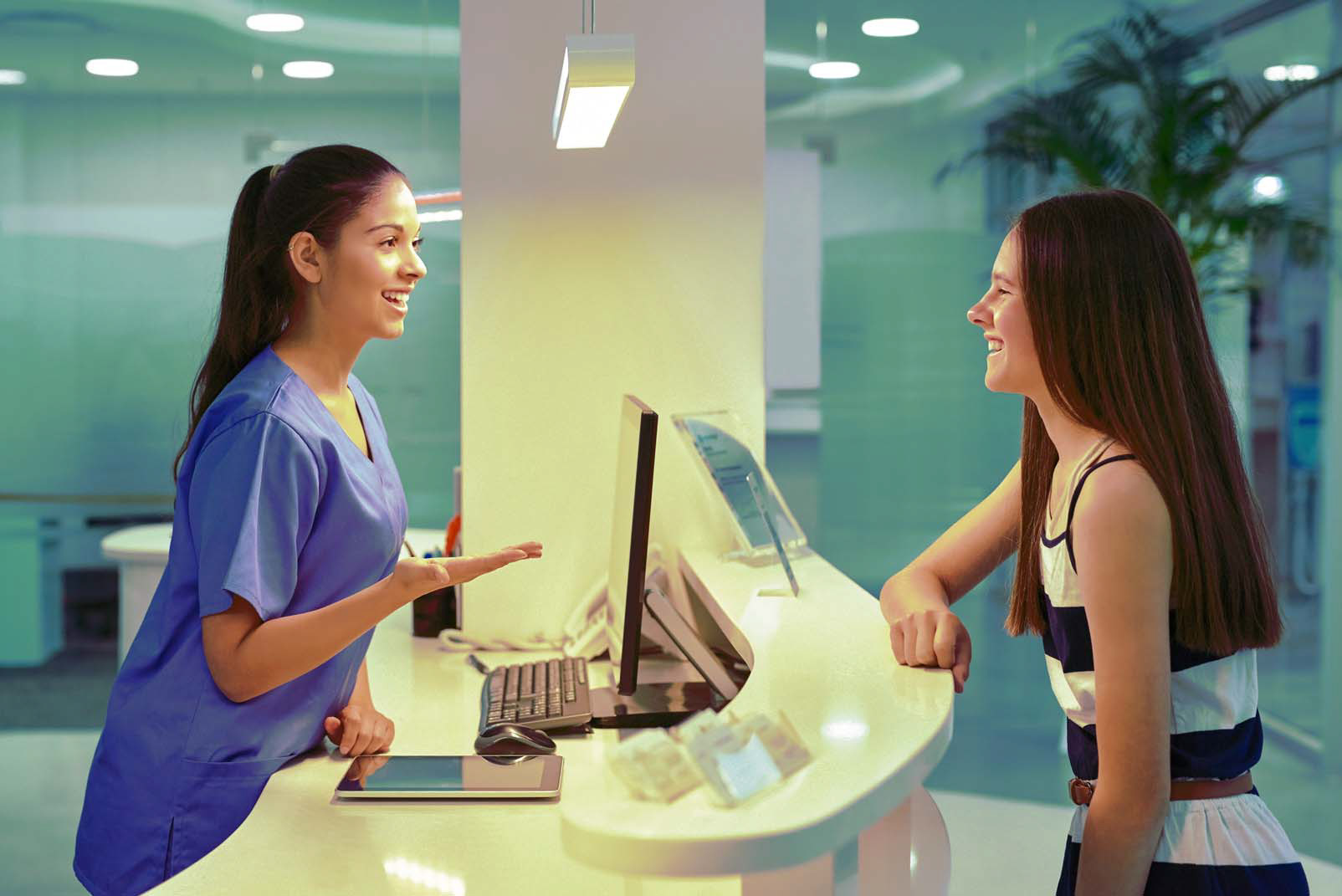 A ready-to-use TRUE TEST®, contains up to 34 allergens and allergen mixes that are responsible for up to 80% of ACD. 3 The allergens in TRUE TEST® require no preparation; the standardized allergens and allergen mixes are already incorporated into hypoallergenic, dehydrated, hydrophilic gels attached to a waterproof backing. Upon application of TRUE TEST®, perspiration and transepidermal water loss quickly rehydrate the dried gel layer, thereby releasing the allergens onto the skin. 8,10 After 48 hours, TRUE TEST® is removed; reactions are then interpreted at 72 to 96 hours after test application.

The homogeneous distribution of allergens helps to minimize the potential for false-positive and irritant reactions. To help ensure accurate testing and interpretation, the placement of allergens is standardized with TRUE TEST®. Allergen stability has been confirmed by in vitro studies, and an optimized allergen dose level has been determined by in vivo dose-response studies.  Reference 12

The allergen doses in TRUE TEST® are sufficient to elicit allergic reactions in weakly sensitized patients, yet low enough to minimize the risk of iatrogenic sensitization. Because the allergens are dehydrated, there is minimal risk of allergen overflow and cross-contamination. With no need to mix and formulate allergens, TRUE TEST® minimizes preparation time. Reference  13

Unit packaging also contributes to reliability and short preparation time. Each test panel is wrapped in an airtight foil outer cover for protection from light and moisture. Each allergen patch is attached to an impermeable, flexible plastic backing that promotes optimal contact between skin and allergen, thereby maximizing allergen penetration. The occlusive backing and allergen patches are held firmly in place by a single piece of nonwoven, hypoallergenic, semi- occlusive surgical tape. The porous nature of the tape should minimize the risk of miliaria and irritation.

The design features of TRUE TEST® help ensure that its prepackaged, standardized allergens perform consistently and reproducibly, with minimal preparation.

TRUE TEST® has been tested clinically for consistency and reproducibility in several studies.12 In each study, three separate production lots of allergens were evaluated for uniform reactivity. All patients had previously confirmed allergy to the test allergens.

In one study of 39 patients, three production batches of nickel sulfate, ethylenediamine dihydrochloride, and epoxy resin produced similar positive results in 90% to 100% of reactions. 12 There were two discordant reactions in patients with known nickel sensitivity. One patient sensitized to nickel sulfate showed two strong (++) reactions to two batches and a negative (-) reaction to batch No. 3. The second evaluator made the same interpretation. A second nickel-sensitive patient had a weak (+) reaction to batch Nos. 2 and 3 and a negative (-) reaction to batch No. 1. In evaluating this patient, a second evaluator scored strong (++) reactions for batch Nos. 2 and 3 and a weak (+) reaction for batch No. 1. Evaluations were performed at 72, 96, or 120 hours. Reference 12

A second study was a randomized, double-blind, placebo-controlled investigation conducted with 47 patients, 42 of whom had responses. 12 Balsam of Peru, black rubber mix, Cl+ Me- isothiazolinone, and thiuram mix produced consistent positive reactions in 93% of cases (39/42), with no discordant reactions observed. The reactions were interpreted by two independent observers. The study found complete correspondence between the two evaluations for responses to all allergens evaluated. Reference 12

In a third study, also a randomized, double-blind, placebo-controlled trial, three lots of p-phenylenediamine generated consistent test reactions in 90% of patients (9/10). 12 There were no discordant reactions in this study.

Taken together, the results of these studies demonstrated good reproducibility from different production lots of allergens contained in TRUE TEST (Table 1). Reference 12,14

The optimal dose for TRUE Test® allergens has been determined through controlled clinical testing to ensure a consistent allergen dose sufficient to elicit a response, yet low enough to minimize the potential for irritation or sensitization. Reference 12

In a controlled, dose-response and irritation study in 211 patients, the final concentration of PPD base in TRUE Test®, 0.09 mg/cm2, was determined by a dilution series of 0.20, 0.15, 0.10, and 0.05 mg/cm2 of PPD base compared to PPD hydro chloride 0.05 mg/cm2 . 12 In the 14 patients who were shown to be allergic to PPD, the 0.10 mg/cm2 dose was the minimum concentration that consistently elicited an allergic reaction with the lowest frequency of irritant reactions. In contrast, 0.05 mg/cm2 PPD hydro chloride caused positive reactions in only five patients. Reference 12

The current HMS concentration in TRUE Test®, 0.18 mg/cm2, was established in a larger dose-finding study. Of the 259 patients with suspected allergic contact dermatitis who were tested in this controlled, multicenter study, 255 were available for evaluation. Concentrations of HMS tested were equal to 0.4, 0.3, 0.2, and 0.1 mg formaldehyde/cm2. The carrier (succinimide) and the vehicle (polyvinylpyrrolidone) also were tested. For comparison, a 1% aqueous solution of formaldehyde was tested. A dose-response relationship was apparent when both positive and irritant (IR) or doubtful (?) reactions were considered. The threshold for increasing irritant reactions was 0.25 mg formaldehyde/cm2, which is well above the HMS concentration in TRUE Test® of 0.18 mg/cm2. The 0.18 mg/cm2 dose was found to elicit consistent allergic reactions with minimal irritation among the patients tested. Reference 12

TRUE TEST® has been evaluated for overall performance and allergen reactivity in 422 patients in four clinical studies in the United States. Patients with suspected allergic contact dermatitis, based on history or clinical signs, were tested in all studies. Reference 14

The four clinical studies were conducted using the TRUE Test® product that contained 24 allergen patches on Panel 1 and Panel 2. In the current product, Panel 1 and 2, the configuration of the allergens has been changed. The quinoline mix allergen patch has been deleted; it has been replaced by a negative control (an uncoated polyester patch). Also, the positions of the epoxy resin and paraben mix patches have been changed on the panels. The change in allergen configuration does not affect the results of the reaction frequencies observed for TRUE Test®. Reference 14

In an open, multicenter study designed to evaluate the performance of TRUE Test® Panel 1 in a conventional clinical setting, 128 patients were screened prospectively for ACD. Positive reactions to 11 of the 12 allergens were observed in 45 patients. There were positive test reactions to all allergens except chromium. The most common allergic reactions were to nickel (n=21), fragrance mix (n=9), and cobalt dichloride (n=9). 14 As might be expected, some itching and burning sensations were reported.

In a second study, 122 patients with suspected contact dermatitis were recruited. TRUE Test® Panel 2, containing 11 allergens and a negative control, was applied to the patient’s back and remained there for 48 hours. The results were evaluated at either 72 or 96 hours. Thirty-three patients showed a total of 47 positive test reactions. There were positive test reactions to all of the allergens except quinoline mix and paraben mix. Reference 14

In a third study of 122 patients who had been referred for contact allergen testing, TRUE Test® Panel 1 and 2, containing 24 allergens, were applied to the patient’s back and remained there for 48 hours. The results were evaluated at either 72 or 96 hours after application. Results show that 71 patients had a total of 122 positive test reactions. Eleven patients demonstrated a total of 14 doubtful (?) reactions. Three patients experienced an irritant (IR) reaction. There were positive test responses to all of the allergens.

In a separate, open, multicenter, within-patient study, Panel 1 and Panel 2 were evaluated together in 50 patients with suspected contact dermatitis. Results were evaluated after 72, 96, 120, or 168 hours. Test sites also were reassessed after 21 days for late and persistent local reactions. Reference 14

A total of 66 reactions were observed in 32 patients. All allergens except caine mix, epoxy resin, and quinoline mix elicited at least one response in this group of patients. The most common reactions were to nickel sulfate (14%) and quaternium-15 (11%), followed by equal numbers of reactions to balsam of Peru, cobalt dichloride, formaldehyde, and thimerosal (8% each). Reference 14

Ten persistent local reactions were observed in eight patients at the 21-day safety visit. One of these had a late ++ reaction to Cl+ Me- isothiazolinone. Most patients (34 of 50) did not experience any itching or burning. Fourteen patients reported mild and two patients reported moderate itching or burning sensations. There were no other adverse events reported in this study. The surgical tape adhered perfectly in 45 patients (90%). Mild adhesive irritation was reported by a single patient. 14 The results of these studies suggest that the TRUE Test® standard panel is a clinically relevant method of diagnosing ACD. 14 A postmarketing survey conducted from the introduction of TRUE Test® in January 1995 through the end of December 1995 supports these clinical trial results. This survey evaluated a total of 1,772 data collection forms completed by physicians administering TRUE Test® during 1995. Reference 15

According to survey results, allergens with the highest reaction rate frequency included nickel sulfate (17.6%), quaternium-15 (11.0%), thimerosal (9.1%), and formaldehyde (9.0%). For those patients who had a positive reaction to the contact allergen test, 27% of the surveys responded to questions regarding clinical relevance. In 75.9% of these cases, the results corresponded to the patient’s contact history. Reference 15

The survey also revealed a low incidence of tape irritation (2.5%) and tape adhesion problems (3.6%). The number of adverse events reported was also very small and centered around symptomatology expected with the elicitation of an allergic reaction. Reference 15