You are here: Education > Contact Dermatitis News > The New It Allergy 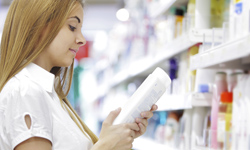 The New It Allergy

The beginning of a year represents the award season in many industries such as film and music. But it’s also the award season in the field of contact dermatitis. Read on to discover the winner of the 2018 Allergen of the Year—an allergen with a surprisingly wide array of applications.

Metal allergy, particularly to the most common of all allergens—nickel— continues to be a hot topic. The op-portunities for exposure to nickel are almost endless. However, as you will read in the second article, body piercing represents a unique exposure because the metal objects used for personal decoration often contain this metal. Not surprisingly, given the allergenicity of metal, the likelihood of a contact allergy increases with the number of piercings an individual has.

The final article continues our series on corticosteroids by introducing the first of the individual markers for corticosteroid allergies—tixocortal-21-pivalate.You’ll want to check future issues when we explore the remaining major corticosteroid markers: budesonide and hydrocortisone- 17-butyrate. If you need to refresh your memory about important points common to testing with any corticosteroid, do see our earlier article, Corticosteroids: A Two- Edged Sword.

The New It Allergy: Propylene Glycol

Here’s a riddle for you: What do anti-freeze, plane de-icers, electronic cigarettes, personal care products, textiles, and a large number of processed foods have in common? If you guessed the 2018 Allergen of the Year, you’d be right! And what allergen has earned that dubious title this year? The honor goes to propylene glycol, a common ingredient in cosmetics; fragrances; and topical, oral, and intravenous pharmaceuticals as well as the above applications—and many, many more!

This year the American Contact Dermatitis Society (ACDS) bestowed its dubious honor to increase awareness of sensitization to propylene glycol and of the challenge associated with interpreting patch test reactions to this allergen. Propylene glycol tends to elicit weak reactions, which can be difficult to differentiate from irritant reactions, and propylene glycol is both an allergen and an irritant. [Systemic contact dermatitis has also followed ingestion of products that contain propylene glycol such as foods (e.g., sour cream) or medicines (e.g., antihistamines)].

However, differentiating weak positive from irritant reactions is crucial to maximize treatment outcomes. Weak reactions that increase over time or that persist to day 7 may indicate a relevant allergy instead of irritation; in contrast, reactions that weaken over time suggest irritation. Patch testing with higher concentrations of propylene glycol may improve sensitivity without significantly increasing the risk of obtaining an irritant reaction. Consequently, the ACDS now recommends testing with the allergen at 100%.

You may not encounter many patients with this allergy, but when you do, their recovery will depend on their receiving the correct diagnosis. Unsure of how to patch test with propylene glycol? Let us help—this allergen is available in several different concentrations, ranging from 5% in petrolatum to 100% as suggested by the ACDS. As always, our goal is to help you make a lasting difference in the lives of your patients.

In slightly more than half a second, a Google search on the term, body piercing, called up 17,200,000 hits. Clearly, piercing, a practice with a pedigree that extends to the ancient Egyptians, Greeks, and Romans and may still be used as an initiation rite in some traditional tribal communities, remains an important personal and cultural statement. Given that the jewelry involved is often made of metal, piercing is also associated with the risk of metal allergies.

This fact is amply demonstrated by the findings from a recently published large-scale epidemiologic analysis (more than 17,000 patients) that evaluated the association between piercing and metal sensitivity (Warshaw EM, Aschenbeck KA, DeKoven JG, et al. Piercing and metal sensitivity: extended analysis of the North American Contact Dermatitis Group data, 2007-2014. Dermatitis 2017;28(6):333-341). The study, an extension of an earlier study, specifically examined nickel positivity as a function of age, gender, and source of exposure, but also analyzed reactions to cobalt and chromium.

Overall, 18.7% of the patients tested positive to nickel, 7.4% to cobalt, and 2.6% to chromium. Piercing was not a significant risk factor for chromium sensitivity. Nor was piercing significantly associated with a risk of sensitivity to cobalt alone. So, neither chromium nor cobalt is much of a clinical concern in terms of body piercing. Nickel, however, confounded the relationship between piercing and cobalt sensitivity, reflecting the well-established co-reactivity between these two metals.

Nickel release is well documented from jewelry from many different countries around the world. As discussed in an article on nickel sensitization in this newsletter almost 5 years ago, (September 2013), the European Union imposed restrictions on how much nickel can be released from products that will be in direct, prolonged contact with skin. A reduction in the prevalence of nickel sensitization followed, but such improvements can be jeopardized by the ease with which items from elsewhere can be obtained. And in no other country does such a regulation exist. Consequently, patch testing professionals must redouble their efforts to educate their patients about the risk of nickel sensitization associated with piercing, a trend that shows no sign of cooling off any time soon.

Tixocortol-21-pivalate (TIX), a lipophilic ester and anti-inflammatory corticosteroid, is considered a Coopman Group A (hydrocortisone-type) corticosteroid (see the September 2017 issue of this newsletter). It is one of the least potent steroids, but it is a strong sensitizer in terms of elicitation. Depending on the region, TIX is found in both prescription and nonprescription creams, lotions, ointments, and powders for eczema and other local inflammations; in ear, nose, and eye drops; and in rectal suspensions. It is also present in nasal sprays used to treat rhinitis, pharyngitis, and ulcerative colitis. In occupational settings, TIX may be encountered in medicaments, creams, lotions, ointments, and powders.

In the United States, TIX is unavailable; hence, its relevance as an allergen is almost nonexistent. In Europe it has limited use as an inhalant although it can be found in both over-the-counter and prescription topical medicaments. In Australia TIX is found in topical medicaments. Scant data are available from other countries. The results of patch testing with TIX, especially in the United States, must be interpreted with these points in mind. Why, then, is patch testing with TIX important?

Based on patch test data from the North American Contact Dermatitis Group (NACDG) from 2001 to 2014, the prevalence of positive reactions to TIX has ranged from about 2 to 3%. Based on NACDG data, TIX also has ranked as a highly relevant allergen as well as an occupational allergen. In particular, healthcare workers are significantly more likely to develop contact allergy to TIX than nonhealthcare workers. Despite the regional difference in the availability of TIX, the prevalence of positive patch test reactions to TIX has been lower in Europe than in North America. The frequency of reported positive reactions to TIX has ranged from a low of 0.1% in southern clinics (mostly Italian) to a high of 1.7% in northeastern clinics (Finland, Lithuania). In Europe, the frequency of positive patch test reactions in children has been reported to be about 0.5%— regardless of age or the presence of atopy. A recent report from the United States, however, placed TIX at 29th among the 40 most common pediatric allergens with a prevalence of 1.84%.

Patients’ corticosteroid allergies may be unrecognized before patch testing. Their dermatitis may be subacute, or it may be chronic and unresponsive to treatment. They often have atopic, stasis, or hand or leg dermatitis. As with any corticosteroid, sensitization should be suspected in patients who fail to respond to treatment or whose condition is worsened by exposure to TIX or one of its related compounds.

Concurrent allergy to other topical preparations is common. Indeed, patients who react to TIX also may react to hydrocortisone (acetate), prednisolone, diflucortolone, methylprednisolone, hydrocortisone-17-butyrate, methylprednisolone aceponate, and prednicarbate. TIX has also been reported as an excellent complementary detector of sensitivity to budesonide, which itself serves as a marker for detecting sensitization to Coopman Group B corticosteroids. Furthermore, reactions to TIX have been associated with reactions to hydrocortisone-17-butyrate, which is in the Coopman D2 group of corticosteroids.

Both the most appropriate vehicle and optimum concentration for patch testing with TIX have been debated, but petrolatum is used in many baseline series. The preferred concentration varies across baseline series. The European Baseline and the Minimum International Baseline series adopted TIX at 0.1% while 1% is used in the Core Allergen Series of the American Contact Dermatitis Society, the North American Standard Series, the Australian Baseline Series, and the British Baseline Series. A multicenter trial found no difference in the number of individuals who reacted to 0.1% and 1.0% TIX.

Timing of readings is important with TIX. In one study about 19% of positive reactions would have been missed by early readings. Therefore, a late reading should be conducted on day 6 or 7 to avoid a false-negative outcome. Edge effects (a reaction confined to the ring of a round patch test chamber) have also been associated with TIX. Some clinicians may consider such a reaction to be a doubtful reaction. Performing a reading at day 7 or another patch test at a lower concentration of TIX can help clarify the interpretation of the finding. Once patients have had a positive patch test reaction to TIX, testing with an appropriate extended steroid series should be considered.

Because TIX readily cross-reacts with other corticosteroids, patients who test positive to this allergen must be informed that they also may react to many related substances. To avoid exposure, patients should be educated about checking ingredient labels or package inserts of all topical, anti-inflammatory preparations (prescription and over-the-counter). If no information is available, patients should verify that preparations are free of TIX (or related corticosteroids) with their pharmacist. Patients also need to inform their healthcare providers that they are allergic to TIX to ensure that their caregivers only use or prescribe products that are free from this allergen. Patients need to be particularly careful about avoiding preparations and nasal sprays that contain TIX and cross-reacting corticosteroids. Patients may encounter TIX listed as an ingredient under alternative names such as tixocortol 21-pivalate; tixocortol pivalate; 11ß,17-dihydroxy- 21-mercaptopregn-4-ene-3,20-dione 21-pivalate; pregn-4-ene- 3,20-dione, 21-((2,2-dimethyl-1-oxopropyl)thio)-11,17-dihydroxy-, (11beta); JO 1016; Pivalone; Procolon; Rectovalone; Tivalon-NT; and Tiprederm.

As one of the important markers for steroid allergy, TIX was developed for the third T.R.U.E. TEST® panel based on interest from the NACDG, International Contact Dermatitis Research Group, and European Environmental and Contact Dermatitis Research Group. TIX is also available in 0.1% (CS498) and 1% (NA61) concentrations in petrolatum from allergEAZE®. If you have questions about the best formulation for your patch testing needs, why not give us a call at 1-800-878-3838?